► positioning the body behind the ball in the Goalkeeper

Within the goalkeeper technique, there are many actions. Today, we talk about the importance of placing the body behind the ball in the front catches. A simple reflection accompanied by some methodological guidelines.

When we talk about technique, we talk about the ability of the goalkeeper to execute a certain action. However, this capacity is often conditioned by various aspects. And one of the most important is physics. Having a good perceptive – motor capacity will be fundamental in the final execution.

When in training stages we work with perceptive-motor circuits isolated with or without the ball, we are also favouring the goalkeeper to get a greater control of his body. Which in turn will favour the specific technical development. It is not about doing and doing, because many times we “fill” the task of pikes, rings, markers… And we end up unconsciously distorting the task. Causing that goal that we pursue, is not fulfilled. Sometimes, simplicity is a virtue and even more so if we talk about stages of formation.

On the other hand, when we talk about performance stages, we believe that the “technical excellence” lies in them. It may be like that and it may not be like that. Since such “excellence” in adult stages will depend fundamentally on whether or not there was a basic work in the goalkeeper training. Increasingly, we see elite goalkeepers with great technical skills and this is due much to that work of repetition, analytical or as we like to call it. Without forgetting that the perceptive-motor works take a great importance even in these stages. It may be true that improving that quality with 30 years is somewhat complicated. However, we should not forget the mental aspect. And is that getting that “spark” in the goalkeeper will cause an extra degree of “motivation” that will encourage him to try more things.

Next, we suggest you to analyze the action of the video before continuing reading.

Surely, the first phrase that comes to mind is: What a mistake! But as goalkeeper coaches, we are going to try to reel in the action to the fullest. To be able to develop an action plan in the case of us being the Frankfurt coach.

The goalkeeper correctly positions before the corner. Seeing that he cannot intervene directly on the ball, he enters the goal line correctly to give himself enough space, and to be able to react in the case of having to intervene. The central defender head clears, letting a second action that is clearly going to finish the rival. It is here, where the goalkeeper has to interpret and in this case he does it perfectly by reducing one or two steps correcting his placement. Until this moment, everything is correct. Nevertheless:

Can the two mates, in front of him ,obstruct the goalkeeper’s vision?

A priori, it seems that no. Since his body position does not vary to see the way of the ball. But in spite of not “disturbing”, they indeed condition. And surely they interfere in some way in his ability to react.

Does the tendency of the ball, that seems to open, and the bounce, just in the catch, make it difficult?

We think so. Since the striking surface is an inside instep and the balloon tendency opens at the last moment. Making the action even more difficult that “damm” bounce that so often poisons the action.

Where is the alleged failure then? 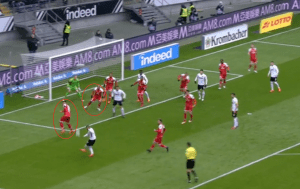 Let’s look at their basic position right at the moment of the beating. The heels have practically in total contact with the ground. What makes it difficult and at that distance prevents any possibility of placing the body behind the ball having made a small adjustment previously. But in addition, his body position does not end up being completely balanced. In the photo, we can see a certain inertia towards his left. What causes your feet are not completely parallel and living the action. 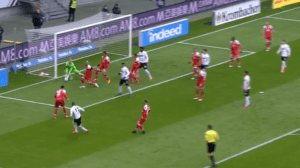 As a general rule within a technical pattern, is to place the body behind the ball when we have opted for a frontal block with fall. When correcting this type of actions we have to be aware of the morphology of our goalkeepers. Since, to a greater extent as a general rule it will cost more to lower the center of gravity.

What can I do as a goalkeeper coach to improve this type of situations?

How do I deal with them?

The first thing we must understand, is that the error is part of the process. And this gives us the possibility to improve. For us as coaches, it causes us uneasiness. And that concern is what will make us think of him: What can I do? How do I handle this situation / error / failure? etc.

No one better than the goalkeeper knows his performance. It is not about being “doomsayers” with the goalkeeper and repeating the error over and over again. It is about being empathetic first and from there, giving improvement tools.

What are those tools?

We have talked about dialogue as a main tool and now we will talk about certain very valid exercises for the improvement of this type of actions. To place the body behind the ball, we need a fast adjustment / displacement / frequency. So perceptual-motor exercises are the most appropriate to improve this technical action when the root of the problem is this. 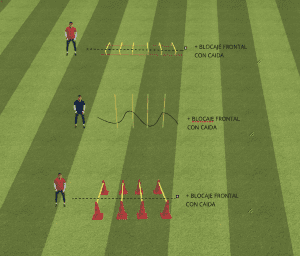 A methodological guideline that we think is important to keep in mind is that we are very careful in designing tasks with material excess. Since sometimes without being aware we distort the exercise and do not attack the root of the problem. If the problem lies in the fact that our goalkeepers have difficulty placing the body behind the ball, perhaps the following materials + the isolated technical action are the best tasks until gradually improving.

It is important to respect a certain pause at the start of the motor. Otherwise, we will cause the goalkeeper to follow without giving time to place the body behind the ball. There will even be times when our hit is not perfect and the goalkeeper decides to intervene with a lateral block / detour. It is also valid since in the competition the uncertainty is what the goalkeeper will find in each situation / action.

These templates have been made with our APP Goalkeeper Planner.

If you want to make training templates likes these ones and have access to the coaching community and all the resources, just subscribe! 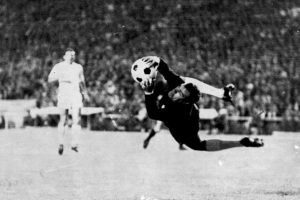 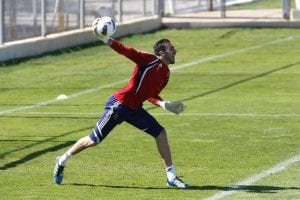 Technical pattern of the throw with bounce in the football goalkeeper 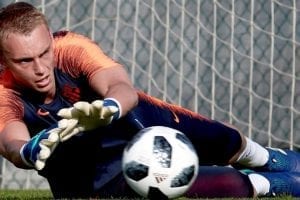